Written by
Posted in
Uncategorized

The 2016 Kalleske Eduard Shiraz has won been awarded the Overall Shiraz Day Winner at the 2018 Edinburgh Great Shiraz Challenge. Competing against 232 other wines from around Australia the 2016 Eduard Shiraz received first place in the over $30 Retail category for the second year in a row as well receiving the most overall votes across both over and under $30 categories at the event.

The Great Edinburgh Shiraz Challenge is held at the Edinburgh Hotel and Cellars annually focussing on giving producers the platform to showcase quality wines of differing styles directly to the public. Consumers can taste their way around 230 plus Shiraz Wines over the course of the day and vote on their favourite wine.  There were many variations of Shiraz for tasting from many regions each with their own unique characteristics. The Barossa was represented strongly as well producers from Eden Valley, McLaren Vale, Adelaide Hills, Coonawarra, Langhorne Creek, Clare Valley, Victoria, WA and the ACT attending on the day.

Troy Kalleske, winemaker and co-owner of Kalleske Wines was thrilled with the win:

“To win the best overall Shiraz at the Edinburgh Great Shiraz Challenge is a fantastic achievement, especially considering the calibre of wines entered from fellow producers. 2016 was an absolute stand-out vintage producing rich and full-bodied wines with beautiful fruit intensity combined with solid tannins and overall inherent balance. When you get a ‘great’ season and combine it with ‘ancient’ vines then the resultant wine is nothing short of impressive. Winning the Shiraz challenge is extremely satisfying because the winning wine was decided by the votes from attendees to the event who have sampled wines from a variety of producers at the event and ultimately voting on taste.”

The Eduard is named in honour of Karl Heinrich ‘Eduard’ Kalleske who in 1838 along with his three siblings together with their parents Johann Georg and Johanne Dorothea migrated from Prussia. They landed in the newly established colony of South Australia and in 1853 they settled at Greenock in the North-Western Barossa Valley and established the Kalleske farm. Eduard and his wife Anna ‘Rosina’ worked the Kalleske vineyard until the 1880s when their son took over the reins.

The Eduard Shiraz is a blend of old dry grown blocks from the Kalleske property, planted between 1905 and 1971.  Hand winemaking and two years maturation results in a stunning old vine wine destined for long term cellaring. The 2016 Eduard Shiraz is concentrated, full-bodied and oozes power but at the same time beautifully balanced. With an intense aroma and lashings of black fruit, dark chocolate and raisin complemented with dried herbs, violets and classy French oak this venerable old vine Shiraz can be enjoyed now but will cellar for a decade or more. 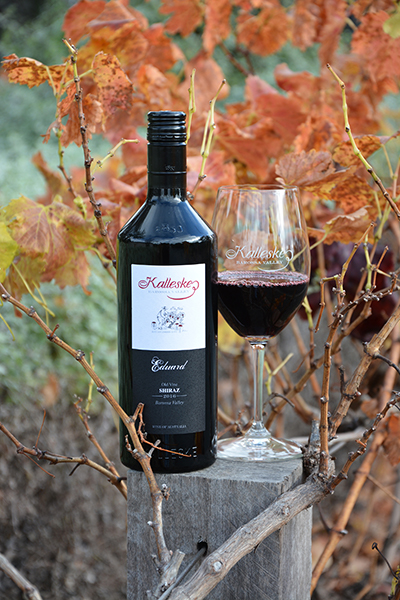 FIND OUT MORE AND PURCHASE THE KALLESKE EDUARD SHIRAZ

IMPORTANT INFORMATION: To receive your wine order by Christmas please ensure your order is placed by the 10th of December so we can ship by the 11th of December. Dismiss